I am here to speak today on behalf of the resident Obstetrician/Gynecologists training at Women & Infants Hospital, who have the great privilege of caring for the people in this community. As doctors, we know that race is a social, rather than a biological construct. We know, scientifically, that the minute variations in the DNA of the darkest “black” person and the DNA of the lightest “white” person do not account whatsoever for the difference in how frequently they die of disease, that is to say, for their relative health disparities. The answer to why people of color have worse health outcomes lies not in their genotype, but in the oppression they experience due to society’s interpretation of their phenotypic skin color. 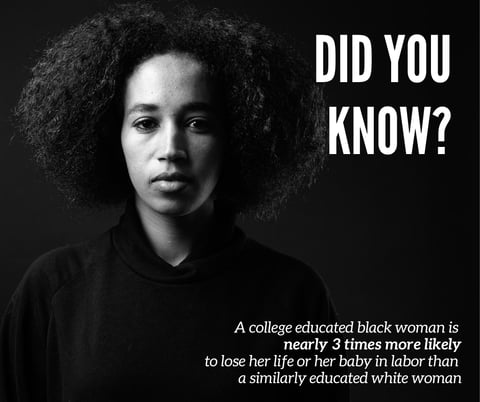 We know that Black maternal mortality is a nationwide crisis: Black moms and their babies die more frequently due to pregnancy and delivery-related complications. We know that this risk persists when we control for maternal age, baseline health, education level, and socioeconomic status. A college educated black woman is nearly 3 times more likely to lose her life or her baby in labor than a similarly educated white woman. The difference is not genetic, the difference is racism. The residents of women and infants feel that this protest is the most important thing we will do at our job today. If you were wondering, YES I am a white person, sometimes tan, not so much during residency, but yes I am Caucasian on the census, and I am standing here today because it is not the job of people of color to end racism. It is mine. It is yours. It is ours.

It is not the job of people of color to end racism. It is mine. It is yours. It is ours.

To quote one of my co-residents, “acknowledging the systematic racism and injustices that black people face is vitally important to creating a culture of medicine that is safe for all patients and providers.” Another said “our patients come to us in a vulnerable state, some of them more vulnerable than others due to the color of their skin and the trauma they have had to endure because of it, both in and out of the medical system.”

We acknowledge that vulnerability, we openly reject institutionalized racism, and we vow to protect them from further harm in OUR house. By educating ourselves and by being ANTI-racism, we are no longer placing the emotional burden on our patients and providers of color to educate us about the racist history of this country and it’s medical, economic and judicial systems. We collectively offer that while we may have once been part of the problem—today and furthermore we are here to listen, to understand and to change the system within which we work.

I have one last thing to share with you today before we proceed with our protest, and it’s a story. So much of my job in here revolves around reassuring scared parents about the health and safety of their unborn children. At a prenatal visit soon after the murder of George Floyd, I was having one of these conversations when we got on the subject of current events and the tone shifted. There I sat with yet another mother, naturally scared for the well being of her baby as she shared with me her most recent, secret prayer for her unborn daughter—not that she would be born healthy, or grow up to be president, but that she would be light-skinned. It is not disease that is most likely to harm her child, it’s racism.

For this woman, for her infant, we are here today. We refuse to deliver another baby into a system that will kill them over the pigmentation of their skin. To quote yet another of my colleagues, “racism is a deadly force.”